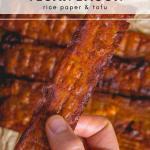 This page contains affiliate links, meaning we earn a small commission on your purchase at no additional cost to you. Thank you for helping to support Sarah’s Vegan Kitchen!

Following the viral response to his vegan eggplant “steak,” celebrity chef Gordon Ramsay has shared another plant-based recipe! This time it’s for an oven-baked vegan bacon made of rice paper, crumbled tofu, vegan butter, and spices.

You can find the original recipe on his website, and check out the video on TikTok here:

Rice paper bacon has been on the scene for a long time — long before any commercial bacon analogues existed on supermarket shelves. So what sets this recipe apart from the hundreds of other rice paper bacon recipes that already exist? Ramsay stuffs two strips of marinated rice paper with crumbled tofu, which is supposed to mimic the “fat” in real bacon.

Between his Vegan Steak (made of eggplant) and Vegan Bacon, Gordon Ramsay has generated a lot of buzz in the plant based community. I had to try the bacon recipe to see whether it was good enough to recommend!

My Video Review of the Bacon

If you prefer video, you can see me prepare the recipe and give my honest thoughts in this video on my YouTube channel. Otherwise, keep scrolling to read the review!

If you’ve ever made rice paper bacon, the procedure is similar, with a few extra steps. Since his TikTok video of the recipe moves very quickly and doesn’t show much detail, I photographed the steps so you could have a better idea of what to expect at each stage.

Whisk together all the ingredients for the marinade in a shallow dish. This includes the soy sauce, maple syrup, garlic powder, vegan butter, smoked paprika, liquid smoke, nutritional yeast, sriracha and cayenne. (Essentially everything, except you’re reserving 2 tablespoons of the nutritional yeast.)

Step 2: Prepare and Season the Tofu

The extra-firm tofu needs to be pressed substantially before using it in the recipe. Then, it’s crumbled into “pea-size pieces” and seasoned with the remaining nutritional yeast as well as 3 tablespoons of the marinade.

Square rice paper is recommended here, so that you can cut your vegan bacon into even strips, about 1 1/2 inches wide. Each strip is dipped into the bacon marinade to coat.

Then we sandwich a bit of the seasoned tofu between two strips of rice paper. The tofu is designed to mimic the texture of the “fat” in real bacon strips.

We then bake our bacon strips for a total of 20-22 minutes. The recipe recommends that you bake it on a wire rack placed on top of a parchment-lined baking tray. I would imagine that this is to allow more hot air to circulate around the bacon strips for maximum crispiness.

You’re supposed to give the strips a flip at 5 minutes. The recipe also instructs us to scrunch the strips with your hands after flipping it, to make it further resemble real bacon. However, this detail isn’t shown in his TikTok video, and the vegan bacon shown in the video appears to be mostly flat. After a few test batches, it doesn’t seem necessary to flip the bacon.

In his TikTok video and on his website, he shows the bacon as a component of his Vegan Summer BLT, complete with a homemade basil aioli made of Just Egg.

Of course I wanted to test the recipe both on its own, as well as in the context of the BLT, to give a fair assessment of it. Because I didn’t have any Just Egg handy, I followed the recipe and simply substituted in the same volume of aquafaba (the liquid from cooked chickpeas).

Here are a few notes re: my impression of the bacon (having made it a few times now for this blog post and my YouTube video):

The marinade is excessively spicy.

Otherwise, the flavor is quite good.

The flavor of the bacon marinade (sans copious amounts of sriracha) is nice, but perhaps a little heavy on the paprika. Otherwise it’s a good blend of savory, smoky and sweet. I’d be interested to see whether substituting in olive oil (or a different vegetable oil) would make much of a difference. Prior to this one, I’ve never seen a vegan bacon recipe that calls for butter.

The recipe instructs us to dip the strips in the marinade until they’re “pliable.” I think because there’s oil in the marinade, the strips never get fully saturated with liquid, so they never become soft and moldable (the way they do when making fresh spring rolls).

When I tried the recipe, this meant that the two strips wouldn’t fully adhere to each other to hold in the tofu. During baking, the top and bottom strip would gradually peel apart and crisp up separately rather than cooking into one bacon strip. The result was tasty and crispy, but since the strips wouldn’t hold together, it essentially undid all our work layering the tofu with the rice paper.

I was able to work around this by very quickly dunking each strip into warm water *before* coating with the marinade. Just a second on both sides is enough; you don’t want it to become soggy, but you want to start the process of softening it so that it will seal with the other strip to keep the tofu enclosed.

Texturally, the bacon gets nice and crispy around the edges. It does firm up in the center, but the tofu creates an odd chew that isn’t my favorite when the bacon is eaten on its own. When served in the BLT, though, the texture didn’t bother me much.

What do you think? Did you try Gordon’s bacon recipe? What did you think? Are you a fan of rice paper bacon at all, or do you have a different favorite vegan bacon substitute? Leave a comment below.

A version of Gordon Ramsay's vegan rice paper and tofu bacon, with adjusted ingredient ratios for the marinade and clearer instructions. Adapted from the original recipe available here: https://www.gordonramsay.com/gr/recipes/veganblt/