Cooks in 45 minutes Difficulty Easy
These triple chocolate vegan brownies are dense and fudgy with the signature crackle-top. Serve them warm with a scoop of vanilla ice cream on top — it's heaven!
Jump to Recipe Print Recipe

Prior to going vegan, I had always been a boxed brownie gal. Sure, I dabbled in from-scratch brownies and tried a handful of popular recipes, but I never felt that the extra effort amounted to a better brownie than my favorite Ghirardelli boxed mix. And if it ain’t broke, why fix it? That was my thinking.

When I went vegan, it didn’t take long before I figured out how to bake up many of my favorite cake and cookie recipes sans eggs and dairy. In many cases this just meant a simple substitution: flax “eggs” for real ones, Earth Balance sticks for real butter, the occasional addition of a starch to help bind ingredients.

Alas, vegan brownies proved to be a much bigger challenge. It actually took years to find a vegan brownie recipe that really ticked all my boxes. After all, the perfect brownie had to have:

Most of the vegan brownie recipes were simply too cakey. It can be hard to achieve the ideal fudgy and chewy brownie texture without eggs, which typically lend richness (egg yolks) and structure (protein content) to baked goods. Many vegan brownie recipes would compensate for the lack of eggs by adding extra flour, which unfortunately makes the final result more fluffy and cakey, rather than dense and rich.

On the opposite end of the spectrum, some vegan brownie recipes I tried would be overly fudgy and gooey – to the point where they never really set or firmed up at room temperature. Again, the culprit was a lack of structure due to the omission of eggs.

Vegan brownie recipes that only called for cocoa powder were always too cakey. The key is to use melted baker’s chocolate to make the batter dense and fudgy and to pack in the richest chocolate flavor. Simply melt the chocolate along with the vegan butter in short bursts in the microwave.

Baker’s chocolate is available at almost any supermarket in the baking aisle. Semisweet varieties by Baker’s and Simple Truth Organic are vegan-friendly. Just double-check, because some brands will contain dairy (such as the Semi Sweet Chocolate Baking Bar by Ghirardelli, which contains milk fat). In a pinch you can simply use more of the vegan chocolate chips you will be adding.

Tip 2: Dissolve the Sugar and Bloom the Cocoa Powder

Simply whisk together the granulated sugar with the cocoa powder and some water just off a boil. Dissolving the sugar helps the top layer of the brownies stay extra shiny and crackly.

As a bonus, the hot water will “bloom” the cocoa powder, drawing out more of its flavor. For the curious, here’s an article with more of the science behind this on The Kitchn blog.

If you want to kick it up an extra notch, use some strong hot coffee for this step instead of plain boiling water! 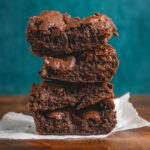 Vegan butter – You can substitute a neutral-tasting oil for the vegan butter if you like. I enjoy the flavor the vegan butter adds to the mix. Vegan chocolate chips – My favorites are the semisweet chips by Guittard or Trader Joe’s. If you have a favorite vegan-friendly chocolate bar, you can also coarsely chop that to use in the brownies. Baker’s chocolate – You can find this in the baking aisle; it usually comes in 4oz bars which are marked and scored so you can easily measure the 30z needed for this recipe. If you can’t find this, you can sub in 3oz of a vegan-friendly dark chocolate bar.
Did you make this recipe?We’d love for you to leave a review on the website! You can also share a photo on IG and tag @SarahsVeganKitchen_ or #sarahsvegankitchen.
Twitter Facebook Pinterest Print