A vegan version of ahi tuna poké! Watermelon is sautéed to transform its texture, then tossed in a savory marinade. A super flavorful, refreshing addition to sushi bowls or salads.
Jump to Recipe Jump to Video Print Recipe

Seafood was the very last thing I cut out to go fully vegan. I was never really torn up about giving up meat, dairy or eggs, but boy, was it hard to envision a life without California rolls! (OK, I might’ve been a little dramatic about the whole ordeal.)

Vegan food technology has advanced at an insane pace in recent years, but I’ve yet to encounter a substitute for fish that really scratches that itch for me. Don’t get me wrong: I love me a Gardein fishless filet dipped in tartar sauce or in vegan fish tacos, but that doesn’t quite fill the void in my soul that was once occupied by spicy tuna.

In the meantime, I think this watermelon tuna poké is the next best thing. It may not exactly fool any seafood connoisseurs out there, but it hits the spot for me and makes a kickin’ addition to poké bowls or homemade sushi. And honestly, it’s so tasty I sometimes just eat it alone with a little sprinkle of toasted sesame seeds and sliced scallions.

What is Tuna Poke?

Poke bowl eateries have been cropping up everywhere in recent years! I had already gone vegan by the time they became so trendy in the States, so the few times I’ve eaten at one, I’ve ordered tofu with my bowl instead. I was very curious to see if how some watermelon tuna would stack up against tofu in a vegan-friendly poke bowl.

Well, yes and no. Do you remember a few years back when the carrot hot dog went viral? Although the texture wasn’t spot-on, a lot of folks (myself included) were shocked that this humble root vegetable could taste so much like a hotdog after just a few hours chillin’ in a special marinade. And when you involve a hotdog bun and all your favorite fixin’s (relish, mustard, kraut, what have you), it becomes even more convincing.

All this to say that sometimes, the flavors we associate with a particular food are more to do with the spices/seasonings involved, or the condiments we typically add to them, than the actual food itself. This is definitely the case with this watermelon poké recipe. The simple sesame-soy marinade and fresh scallions bring this into an unexpected but delightful savory space.

This recipe is astoundingly simple and requires just a few ingredients!

How to Make Watermelon Poké

Step 1. Cut your watermelon. If you want to use this “tuna” for poké bowls, cut it into cubes between 3/4″ – 1″ thick. If you plan to use it in sushi rolls or nigiri, cut it into short, wide strips.

Step 2. Cook the watermelon. Next you’ll sauté the watermelon in a nonstick pan over medium heat. The goal here is to simply cook out as much of the excess liquid as possible and to soften the watermelon. You don’t want it to brown or char in any way, so keep an eye on it, stir often, and reduce the heat as needed. When there isn’t any extra watermelon juice in the pan, you’re ready to marinate.

Step 3. Marinate the watermelon “tuna.” Whisk together the soy sauce, sesame oil, and rice vinegar in a sealable container, then add your cooked watermelon and scallions and toss to thoroughly coat. Pop it in the fridge for at least an hour. The flavor and texture improves as it sits, so I recommend making it in advance and letting it marinate overnight for the tastiest vegan poké experience. 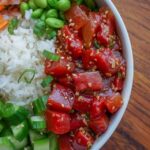